There’s a very long prologue to this Trip Report. I’m hoping talking openly and honestly about the issues presented here can generate some discussion about how a person maintains a long-term relationship with their passions.

Identity. This word has been giving me a sinking feeling in my stomach for a while now. To me, identity is how you introduce yourself to a stranger. It’s the words you use to describe yourself.

“Hey! I’m Jen. I’m a climber”. Throughout the past six years, more often than not, this is how I’ve introduced myself. Climbing has been my identity. I’ve always felt chagrin about that fact I’m not a strong climber. I’m not sending 11’s for breakfast.

I’ve had writer’s block for the last few months because, well I’m just going to say it, I’ve been dreading climbing. I want to talk about this dread because I know I’m not the only one. I’ve built up this persona of being a climber. What are the expectations of that? Always willing to climb? Try hard 24/365? Structure your life to always prioritize climbing?

Climbing as an activity takes you to the limits of your physical and mental capabilities both casually and often. For example: You’re heading out to the crag after work one day. Because you live in Colorado, it’s a 15 minute drive to Clear Creek Canyon/Boulder Canyon/Eldorado Canyon. Casual. You hop on a sand-bagged 10a to warm-up. Your blood is pumping. Now it’s time to try something harder. That’s the expectation of cragging: warm-up, then push your limits. You’re pulling on some tiny crimps. You’re 5 feet above your last bolt. Your adrenaline is pumping, soaring. You clip, shake-out. Get above your next bolt, cue adrenaline. Your left forearm can’t hold on much longer. Clip. Climb above next bolt, fear again. Often.

As climbers, we are often taken to this red-line place of fear. It can be the biggest feature of our sport. One that I’ve been struggling with. I know people swear by reading books like The Rock Warrior’s Way to calm your mind, people say to take a bunch of whips at the gym, people say all kinds of things.

And because climbing has been my identity for my adult life, I’ve felt obligated to keep pushing. Push through the fear. Through the pain. Because, what type of climber would I be if I had to admit I wanted a break?

I’ve been taking my butt to Mother Arkansas. Casually and often. The Arkansas River in Colorado hosts an entirely different group of people: river people. Their craft? Rafting.

Climbing: working against gravity; rafting: working with gravity. Climbing: you notice that cheeseburger you had yesterday when trying to pull your butt up pocketed 10c; rafting: you drink a lot of beer and eat a lot of food – in fact, it’s expected. Climbing: you’re not going up your project without weeks of finger strengthening, abs workouts, and shoulder mobility exercises; rafting: pry and draw your boat through rapids as you read them – if you swim, you swim.

Rafting isn’t climbing. And that’s the point. Is rafting still hardcore? Of course. You’re surrounded by liquid that wants to kill you. The first two rules of rafting are to: “Stay in the boat!”. But gosh is it fun.

A classic scene on the Arkansas: sunshine, rafts, ominous 14ers.

Thanks to my friend, Ramon, I’ve had a chance to hang out with ridiculous river rats. I’ve learned words like: strainer, pour-over, foot entrapment, FORWARD ONE, hero-stroking, “Salida 7”, and much more.

It’s an intoxicating atmosphere. A bit of fear mixed in with sunscreen topped with a healthy risk of giardia and staph.

If you’re like me and haven’t rafted much – it’s way too much fun to get dropped into a culture with which you have had no previous interaction. Climbers can be very Type A (goal-driven, perfectionist, competitive); rafters seem to tend towards Type B (laid back, go with the flow – literally). There are lots of completely true stories. Beers. And laughs.

Ramon with the Royal Gorge. 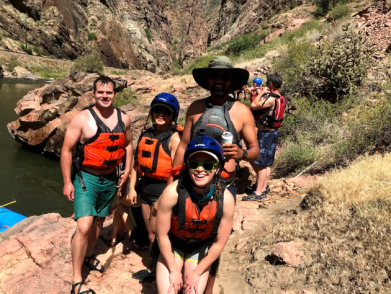 Our crew: Ramon, Kristina, and myself. Guided by Kotty.

But for right now, I just want a break. And that’s okay.

What tips do you have for staying in love with your hobbies? How do you foster a continuing desire for climbing/skiing/table-tennis/etc?

3 thoughts on “Trip Report: From Rock to River”

This former PNW resident (read: Vitamin-D-deprived) found her way to the land of 300 days of sunshine: Colorado. In my new-found playground, I've set myself on a noble quest to build up my sports bra and goggle tans.